This essay is dedicated to what I would call a ‘loose’ collection of classic fairy tales by the Folio Society. The books were not all officially released as part of a collection, but the size and binding designs are complementary, and most of the works are facsimiles of volumes that were released during the period known as the “golden age of illustration,” which lasted from the 1880s until shortly after WWI. Many of the binding designs were redrawn by David Eccles based on original work by the illustrators, and the colourful spines are very distinctive on a bookshelf. The books are large and sturdy, the illustrations are beautiful, and there is plenty of white space around the text which makes them very easy on the eyes.

All the books are reviewed in the video above if you’d like to see inside them, and clicking on the images below will bring up the larger file if you’d like a closer look. 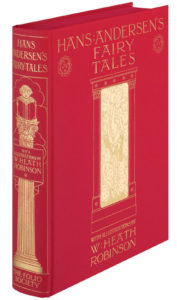 About the book: William Heath Robinson was an English cartoonist and illustrator best known for drawings of ridiculously complicated machines for achieving simple tasks, and in the UK the term “Heath Robinson contraption” was used during WWI in much the same way that “Rube Goldberg Machine” is used today in the US. He first illustrated Hans Christian Andersen’s Danish Fairy Tales and Legends in 1897, and then again in 1913 when he illustrated Anderson’s Fairy Tales, the book on which the Folio Society edition is based. This edition contains 17 of Andersen’s most famous tales’.  Robinson’s illustrations are lovely and the book includes 16 colour plates and numerous black & white illustrations.

The tales: The Marsh King’s Daughter, Tommelise, The Snow Queen (in 7 parts), Elfin-Mount, The Little Mermaid, The Storks, The Nightingale, The Wild Swans, The Real Princess, The Red Shoes, The Emperor’s New Clothes, The Swineherd, The Flying Trunk, The Leaping Match, The Shepherdess and the Chimney-Sweeper, The Ugly Duckling, The Naughty Boy. 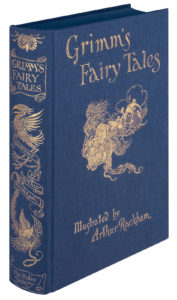 About the book: The FS volume of fairy tales by the Brothers Grimm is drawn from the mammoth collection first published in 1909 and illustrated by Arthur Rackham. It features 40 full-color plates, plus over 60 black-and-white spot elements, and feels quite luxurious to read. Rackham is, of course, probably the best known of the golden age of illustrators, and Folio have published several volumes featuring his work.

The tales: The Golden Bird; Hans in Luck; Jorinda and Joringel; The Bremen Town Musicians; Old Sultan; The Straw, the Coal and the Bean; Briar Rose; The Dog and the Sparrow; The Twelve Dancing Princesses; The Fisherman and his Wife; The Wren and the Bear; The Frog Prince; The Cat and Mouse in Partnership; The Goosegirl; The Adventures of Chanticleer and Partlet; Rapunzel; Fundevogel; The Valiant Tailor; Hansel and Gretel; The Mouse, the Bird and the Sausage; Mother Hulda; Red Riding Hood; The Robber Bridegroom; Tom Thumb; Rumpelstiltskin; Clever Gretel; The Old Man and his Grandson; The Little Peasant (or “Peasan”, as misprinted in the Contents of my 1996 printing. Is this a FS misprint, or a reproduction of the 1909 edition?); Fred and Kate; Sweetheart Roland; Snowdrop (Snow White); The Pink; Clever Elsa; The Jew among the Thorns*; Ashenputtel; The White Snake; The Wolf and the Seven Kids; The Queen Bee; The Elves and the Shoemaker; The Wolf and the Man; The Turnip; Clever Hans; The Three Languages; The Fox and the Cat; The Four Clever Brothers; The Lady and the Lion; The Fox and the Horse; The Blue Light; The Raven; The Golden Goose; The Water of Life; The Twelve Huntsmen; The King of the Golden Mountain; Doctor Know-All; The Seven Ravens; The Marriage of Mrs Reynard; The Salad; The Youth who could not Shudder; King Thrushbeard; Iron Hans. 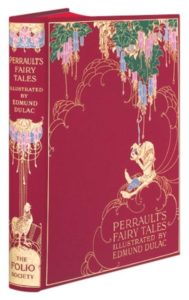 About the book: When Charles Perrault, a civil servant in Paris in the 17th century, heard his son’s nurse recounting old French folk stories, he wrote them down, for fun. This edition is taken from Sir Arthur Quiller-Couch’s 1910 “The Sleeping Beauty and Other Tales from the Old French” and other tales translated by Robert Samber, complemented here by 30 colour paintings of Edmund Dulac, as well as black and white headpieces at the start of each story. Edmund Dulac was a French-born British naturalized illustrator, who – in addition to his beautiful children’s and fantasy illustrations – was also responsible for designing banknotes during WWII as well as several sets of postage stamps.

The Fables of Æsop 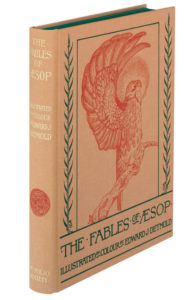 About the book: Edward Julius Detmold and his twin brother Charles Maurice were prolific Victorian book illustrators, born in London in 1883. Their watercolours were influenced by traditional Japanese art and the Art Nouveau movements, and their work was already being exhibited at the Royal Academy when they were only 13. In 1903, at the age of twenty, the twins were commissioned to produce 16 watercolours for Rudyard Kipling’s The Jungle Book, which was tremendously successful, but tragically Maurice ended his life in 1908. Following this tragedy, Edward threw himself into his work, and in 1909 he produced 23 colour plates and a host of pen and ink drawings for The Fables of Aesop, and it is a facsimile of this edition which The Folio Society produced in 2006. 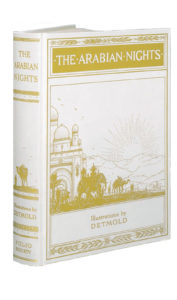 About the book: Edward Detmold became renowned as one of the most talented illustrators of his time, particularly his depictions of plants and animals. In 1924, Hodder & Stoughton published The Arabian Nights with 12 colour plates, a change of direction for the artist into the realms of fantasy, and a facsimile of this edition was published by the Folio Society in 2003. Edward was known to be very painstaking in his work, so much so that he frequently missed deadlines, and shortly after this masterpiece he retired completely from public life. 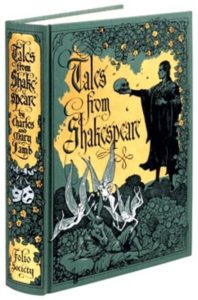 About the book: This adaptation of 20 of Shakespeare’s plays for children by Charles and Mary Lamb, first published in 1807, uses small excerpts from Shakespeare, and retains some of the feeling of the original. However, but do pare away sub-plots and characters, and sanitize situations, to make relatively simple stories appropriate for children.

This reproduction of a 1909 edition contains 12 colour plates each by a different artist. I would consider it interesting from a historical point of view, but the archaic language and lack of illustrations could be a turn off for most modern children. 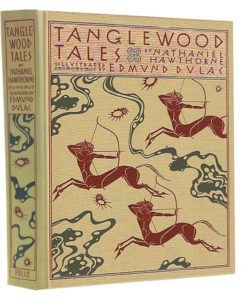 About the book: Nathanial Hawthorne’s Wonder Book was followed by a ‘second wonder book’ known as Tanglewood Tales, a re-writing of more of the ancient Greek myths for children.

This volume includes Theseus and the Minotaur and Jason and the Golden Fleece. This volume is based on the 1918 edition illustrated by Edmund Dulac – who also did Perrault’s Fairy Tales as I mentioned earlier, and includes 14 full-colour plates.

A Wonder Book for Girls & Boys 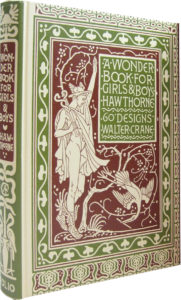 About the book: Nathanial Hawthorne adapted the fanciful tales for children in his Wonder Book from classical mythology. Contained within are such memorable stories as The Gorgon’s Head, The Chimaera and The Golden Touch. The original volume was first published in 1852, but the Folio Society edition is based on the 1892 edition with 60 illustrations by Walter Crane, including 19 colour plates.

This volume was illustrated at the time when the William Morris/Walter Crane inspired arts and crafts movement was at its height, and the full-page colour illustrations are classics of their type. 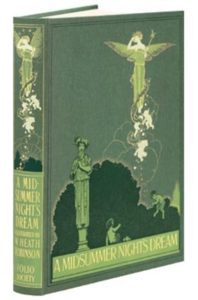 About the book: Far superior to the Lamb’s Shakespeare collection I think, is the Folio Society version of A Midsummer Night’s Dream, which is a truly lovely edition. I am sure most of you are familiar with the story, which includes the adventures of young Athenian lovers and a group of amateur actors, who are manipulated by the fairies.

The text of this edition is taken from that first published by Constable and Co. in 1914 and the treatment of the play is exquisite. From the title page, to the playful two-page spread that closes the book, there are delights on nearly every page. There are 12 full-page colour plates, but it is the variety of Robinson’s black-and-white illustrations — 32 full-page, along with plentiful vignettes — that makes this book the ultimate graphic presentation of Shakespeare’s most beloved play.

A Wonder Book for Girls & Boys 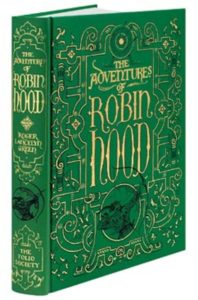 The Adventures of Robin Hood

About the book: I also include in this collection one volume with contemporary illustrations. The adventures of Robin Hood are here collected and retold by Roger Lancelyn Green, a British children’s writer and contemporary of CS Lewis and JRR Tolkien.

The original version was published in 1956, and it’s a lovely retelling, making use of many sources and portraying a wily Robin and a capable Marian, although the language is a little stilted. This edition has some lovely contemporary illustrations drawn in a classic period style by Cambridge artist John Holder.

East of the Sun, West of the Moon 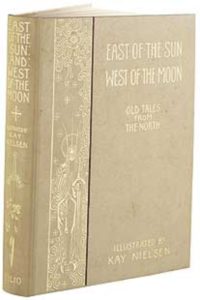 Illustrator: Kay Nielsen
Date Published: Original 1910, FS 1998 | Status: Out of Print
Where to buy: East of the Sun, West of the Moon @ Abebooks

About the book: First published in 1914, East of the Sun and West of the Moon (‘Old Tales from the North’) is a celebrated collection of fifteen fairy tales, gathered by legendary Norwegian folklorists Peter Christen Asbjørnsen and Jørgen Engebretsen Moe on their journeys across Norway in the mid-nineteenth century. Danish illustrator Kay Nielsen provided 25 colour plates and 21 monochrome images for this collection, and the artwork is widely considered a jewel of early 20th-century children’s literature. The images were reproduced using a 4-colour process in contrast to many of his contemporaries that used the more characteristic 3 colours. The cream binding on this facsimile is known as “elephant hide,” which is a type vegetable parchment.

The tales: East of the Sun and West of the Moon; The Blue Belt; Prince Lindworm; The Lassie and Her Godmother; The Husband Who Was to Mind the House; The Lad Who Went to the North Wind; The Three Princesses of Whiteland; Soria Moria Castle; The Giant Who Had No Heart in His Body; The Princess on the Glass Hill; The Widow’s Son; The Three Billy-Goats Gruff; The Three Princesses in the Blue Mountain; The Cat on the Dovrefell; One’s Own Children Are Always Prettiest. 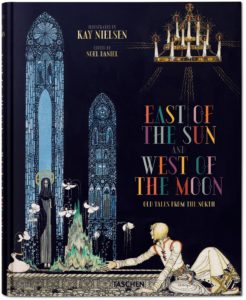 I adore Key Nielsen’s work and the FS edition East of the Sun, West of the Moon is an absolutely lovely volume, but it can be difficult to source second hand. If you’re interested, I think the recent Taschen edition of this book is well worth the investment, as it reproduces the illustrations in vivid detail, it has a truly beautifully redesigned very clear layout, and includes close-ups and fascinating historical essays as well. It even has additional illustrations that are not in the FS edition.

➡ I have made a comparison video for these two editions if you’d like to see the visual difference.

Many of these books are unfortunately out of print and you will need to source them second-hand. But there are a couple still available directly from The Folio Society.