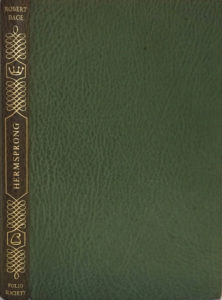 One of the rarest folio society books ever produced was a special limited edition binding of Hermsprong by Robert Bage.

During the late 1950’s a number of Folio Society members were interested in having the option to buy the Society’s books in specially bound and signed limited editions. So in 1960 five experimental limited editions were produced, to be bound in full morocco leather, signed by the illustrator and numbered on an inserted colophon leaf. However, they did not prove particularly popular and despite the original intent to do a limitation run of 250, the actual number of copies bound ranged from 25 to 75 copies only.

The rarest of these rare volumes is Hermsprong or Man As He Is Not by Robert Bage, illustrated and signed by Cecil Keeling. It was published in 1960 and bound in green morocco. As was more usual for this time period, the signature is bound in at the end of the book, not the front. Only 25 copies of this special binding were produced, and so I’m showing it in the video above since it’s not likely many people will ever have the opportunity to see this edition otherwise. As you can see, my copy has been well read, and the leather has darkened along the spine. I randomly found it in a second-hand book shop, filed with the standard editions because the signature had been overlooked being in the back of the book, which was standard for this time. I didn’t know it was valuable at the time, but I’m very glad I picked it up! (Of course, if you’re interested in the book itself, Folio also released a standard edition of this book at the same time – same contents, buckram binding – which is far more commonly available.)

Hermsprong was Bage’s last novel, written about a generation before Jane Austen. It satirises English society of the 1790s targeting, in particular, corrupt clergymen, grasping lawyers and wicked aristocrats. The protagonist, Charles Hermsprong, is a European raised among Native Americans, who visits Europe and is dismayed by what he encounters. The story celebrates lively debate and has been categorised by some as a romantic comedy.

Folio 21 – one of the early Folio society bibliographies – has a delightfully amusing entry on the book: An example of the ‘unpopular’ title which we feel must be included in a programme from time to time, both for its intrinsic merit and to give balance. Hermsprong is a brilliant novel, but fulfilled all our expectations as an extremely poor seller.

If you are interested in the other volumes in this series, you can check them all out in the FS Bindings Illustrated Bibliography page. 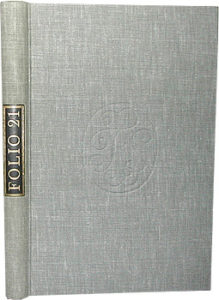 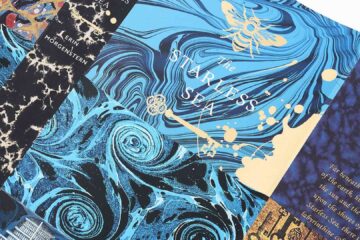 An introduction to Penguin's deluxe limited editions, only 100 copies of each released, including The Starless Sea by Erin Morgenstern and Go Set A Watchman by Harper Lee. 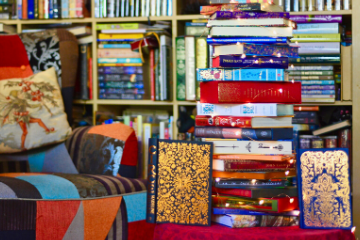 Most Beautiful Books of 2019 – A Holiday Gift Guide

An illustrated review of the most beautiful books published in 2019 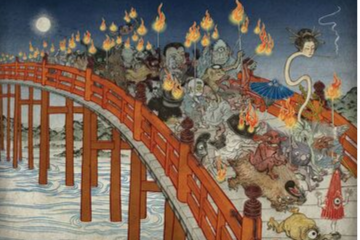 A review of the Folio Society fine press edition of 'Japanese Tales' by Royall Tyler.