I don’t usually do “unboxing” videos, but I made an exception for this edition of Oscar Wilde’s Fairy Tales because the packaging is so pretty. In fact, too pretty, because I can’t bear to throw it away but I want to display the actual book cover in my shelf and I don’t have spare storage space for book boxes (#firstworldbookcollectingproblem, haha). The books in this series come shipped in a specially designed and illustrated keepsake box, which even features little design extras like illustrations on the inside wrapping.

This book is part of The Beehive Books ‘Illuminated Editions’ collection, which is an ongoing series of illustrated classic literary masterworks (the rest of the books in the series are reviewed here). Each volume is filled with stunning illustrations by a different contemporary artist, and the overall series design is beautifully directed by Maëlle Doliveux and Josh O’Neill of Beehive Books. You can really tell that this is a publishing house run by people who love books, because they are focussed on producing a volume that is really remarkable and they don’t compromise on design or materials.

The books themselves are very large, clocking in at around 9″x12″. They are quality cloth-bound hardcovers with sewn signatures. The slipcases have really elaborate debossing and embossing which creates a fabulous texture, they are blocked with an almost foiled paint, giving them a warm glow, and they have a die-cut circle through which the single colour of the slipcase gives a peek into the brightly colored design of the book below.

Each edition in the series includes a minimum of ten full page illustrations, along with numerous spots, illuminated letters, and other gorgeous design pieces. The Fairy Tales of Oscar Wilde here is illustrated by Yuko Shimizu, a Japanese illustrator based in New York, who is also known for her award-winning work on the DC Comic series The Unwritten. This edition also includes an original introduction by American novelist Michael Cunningham. The interior is printed on a smooth creamy, acid-free uncoated, and the books in the series are produced in a somewhat limited edition of 2500.

Now, about the contents. Oscar Wilde was an Irish poet and playwright best known for his humour, his novels, such as the Picture of Dorian Grey, and the play The Importance of Being Ernest, and his tragic early death. However, during his life he also wrote many wonderful fairy tales. The tales were published at the time in two collections, The Happy Prince and A House of Pomegranates, and this Beehive edition includes both volumes. Wilde’s tales are magical and sweet, although they can also be a little bit grim or poignant, and Yuko’s illustrations reflects all these aspects – in fact, this edition won the Art Directors Club annual silver cube award in 2019.

The first few books in this series were first released via Kickstarter campaigns, and backers also got a free e-copy of the book. If you are in the US, then this was a great way to get the books as well as support a new publisher. However, if you’re happy to wait and do without the Kickstarter promotional materials, the books have all later been made available through retail stores, which is where I purchased mine because international shipping costs were much more affordable this way.

It’s a beautiful book and I would highly recommend it as a gift for someone artistic or creative. (With tall bookshelves.) I would say the book is geared towards a slightly older audience of young adults and artists, as well as fairy tale collectors like me.

I recommend checking out some of the other books in the series – it’s an eclectic mix ranging from dark scifi with The Island of Doctor Moreau to Fyodor Dostoyevsky’s intense Russian psychological novel Crime and Punishment.  I’ve pre-ordered Peter Pan which is coming out later this year and I’m really looking forward to that! 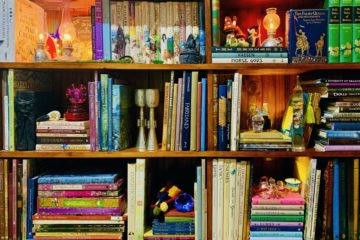 MinaLima's design for Lewis Carroll's Alice in Wonderland is a delightful addition to their interactive children's classics series and a must for any Alice collection.